While we are on the topic of vending machines, I gotta mention  hacking.

I remember that a trick with a coin with a little hole attached to a string worked on Soviet payphones, but I don’t remember seeing it used on soda machines.  I never tried it. Mr Krabs in a Spongebob cartoon about the origin of Krusty Krab did that, sot it’s probably an international “hack”.

At UGO one bright person tried to cheat the Coke machine out of a dollar by applying a long piece of scotch tape to the bill  and trying to pull it back out once the machine swallowed it. This broke our subsidized 25 cent machine resulting in an office full of pissed off people. That cost the company a few hundred dollars.

Then there was an interesting machine at iXL – one that dispenses glass bottles of Snapple. There are 5 shelves, and glass bottles fall down and somehow surviving. Somebody figured out that that particular machine checked if the bottle fell to the bottom before taking the money. If one stopped the bottle by holding a flap that swings to protect the dispensing box at the bottom, the machine was tricked into thinking that the bottle did not dispense and let the user make another selection. Everything was fine, but one not very bright individual caught one bottle with the flap and proceeded to drop a second bottle from the top shelf directly overhead. The dispensing bin was immediately filled by glass shards and Snapple. 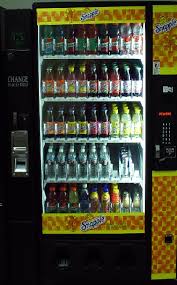 Some American soda machines have a hidden menu that can be activated by pressing drink buttons in the following order : 4 2 3 1. I activated it once by accident (the dang machine was out of everything) and only now found a reference to this online. Some snack food machine can be induced to show its internal temperature, but I don’t know the key combination.

The company where I work now used to have two presidents at the same time. One liked Coca Cola and another liked Pepsi. Because of that we used to have two vending machines. Now they are both gone and we have only one machine.

And last is but not least : a weird “hack” that some of my classmates used to trick a proprietor of a soda kiosk in Odessa. They cracked a  broken fluorescent lamp open and rubbed the white residue found inside on a copper 2 kopek coin. The coin became silvery and could be easily passed off as a 15 kopek coin. What’s that white residue? Deadly mercury.