Today, when we think about science fiction, we think of rocket ships and outer space. But things were different in the 40s and 50s. Back then the blue sky was almost as exciting a frontier as the black void of space. Hugo Gernsback’s magazine Air-Wonder Stories and TV serial Zombies of the Stratosphere featuring young Leonard Nimoy were all the rage.

The word “stratosphere” was considered and became a futuristic branding element a bit less common than “o-matic” and “o-rama”. It seems to me that Boeing started this trend : B-52 Stratofortress bomber , KC-135 Stratotanker and 377 Stratocruiser. But then the marketers caught on to the hipness of everything “strato”: Sheaffer Stratowriter pen, Fender Stratocaster guitar, Pontiac StratoChief car and probably many other things that I don’t know about. Prefix “strato” was usually applied to top of the line products.

And you don’t really get any more “strato” than Zenith Stratosphere 1000Z console. 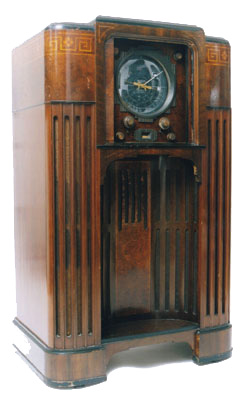 Considered by some to be the best vacuum tube radio ever produced, it is also one of the rarest. It was top of the line and cost $750 when it was made in 1930s. Times were tough, and there were not enough customers to purchase these amazing and beautiful radios. Only 350 sets were ever made, 40 are known to survive. Today 1000Z is a wet dream of any vacuum tube radio enthusiast.

What attracts me to 1000Z? Well, first of all I am a fan of vaccuum tube sound. The absolutely stunning art deco design is just gorgeous, especially the airplane style tuning dial. It looks like it belongs on a starship. This is how I imagine Henry Kuttner’s “twonky” device.

There is an interesting thing about the ads for 1000Z. As it can be seen in this ad, there is a art deco porcelain cat sitting inside the concave area of the cabinet of the radio. This led some collectors to believe that the cat was sold together with the radio. But apparently it was only used for the photo shoot. Still, people lucky enough to own a Zenith Stratosphere try to buy a cat statue to go with it.