I stumbled upon something called erowid.org forums. According to these people almost anything from absinthe to yoga can be abused. Grind up some caffeine pills, add ammonia, microwave the mixture – bam – freebase smokable caffeine. It’s a thing. Can you abuse blue cheese? Can you have a bad trip on chocolate? It’s crazy stuff. My father-in-law once told me about a group of young guys, all from orphanages, that he met when he served in the Soviet Army. Those kids would talk for hours and hours about retiring on the government pension. I am a little bit like that too – I like to plan my retirement.

One thing that I’ll do then is write a series of science fiction stories, probably in graphic novel format. Since it might very well be that all the things that I squirrel away in my notes might come true by the time I retire, let me share with you some of my world building.

The protagonist’s name is John van Nostrand (after a Brooklyn street name). He’s a space pilot from future Brooklyn (or alternative past). His antagonists are pilot Naru Nan, underhero Jackson, supervisor Coder Jones and inspector Rublev. I haven’t worked out the characters much yet.

Some notes about the future/alternative past. A series of technological breakthroughs accomplished the following:

Sleep is not necessary anymore. Thanks to a wonder drug or a surgical implant of some sort people no longer have to spend 8 hours sleeping. Sleep becomes optional, and a sort of entertainment, as an REM inducing machine can produce vivid and even lucid dreams on demand.

Total domination of bacteria and viruses through biotechnological means (no nanotech though). This in turn leads to a revolution in cooking (among other things). It becomes perfectly safe to eat all foods raw. Cooking a steak, for instance becomes mechanized. Lasers sear the outside, while inside can stay pretty raw. Overall, a specialized food computers are used. They can laser-sear, microwave, dry out, mince, liquefy and wrap in special membranes and capsules and produce all sorts of futuristic foods. Many techniques involve “jet printing” ingredients.

Bathing is now optional, a sort of relaxation as well. A special membranous symbiont is genetically engineered to live inside people’s skins and consumes sweat and toxins.

Buildings are built by the jet printing method with titanium-containing alloy for strength, as well as slew of ceramic and other materials for insulation and decoration. Ridiculously tall and strong skyscrapers result.

Huge space cities are built out of towed metallic asteroids, again through jet printing. Real estate on Earth and in space is spectacular.

I still have many things to decide upon, such as the mode of space travel, politics, and a million other things. There will be no aliens or interstellar travel though. I’m pretty sure about that. 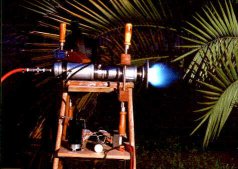 The spirit of adventure is alive and well in me. Today instead of just eating my Atkins bar, I decided to nuke it in a microwave for 15 seconds. Well, it became much more edible!
Guess I was not the first one to figure this out.

Speaking about nucular. One of my favorite magazines, The Bulletin of the Atomic Scientists, had a very funny article about mispronunciation of “nuclear”. Homer Simpson is not the only offender in this matter. Eisenhower , Reagan, Bush-I usually said something like “NOO-kyoo-lur”, “NU-kyuh-ler” or “NU-cu-lar”. Carter, in a class of his own, liked to reminisce about being a “nu-KEE-ar engineer” (I wonder, was he the only engineer among American presidents?)

One of my favorite FIDO origin lines from was “I put instant coffee in the microwave oven and almost went back in time.” I don’t advise it, even for time traveling :)